Prime Minister Imran Khan launched the Naya Pakistan Housing Program (NPHP). While talking about the program on October 10, 2018 he said that 5 million houses would be constructed under this mega project in the next five years. Comparing Pakistan with other developed and underdeveloped countries he revealed that only 0.25 % people in Pakistan build houses on loans while the ratio in other countries is up to 80%.

PM Pakistan said that the target of this project is the ordinary man who is not able to build his own house. He said that the government would provide the land and the private companies will be invited to build houses. The government would facilitate them in this matter. Moreover, he revealed that this project will not only provide houses to the common people but also will provide them job opportunities because 40 industries are directly related to housing. He added that the government would encourage the youth to start their own construction companies. A Skill Development Program (SDP) would be initiated to train the youth in the construction industry.

He announced that an authority named Naya Pakistan Housing Authority (NPHA) would be formed in 90 days and a task force consisted on 17 members will look into the matters of the authority. Khan said he himself will monitor this program.

PM announced that initially, the government with the collaboration of National Database and Registration Authority (NADRA) is starting a pilot project in seven districts including Islamabad, Faisalabad, Gilgit, Quetta, Muzaffarabad, Swat, and Sukkur. In this first project federal government employees will register themselves and will describe their priorities and payment capacity in their applications.

Additionally, he announced the formation of National Financial Regulatory Authority in 60 days to remove the hurdles in the NPHS. Finally, he ended up saying that this is very important initiative to the prosperity of the nation. 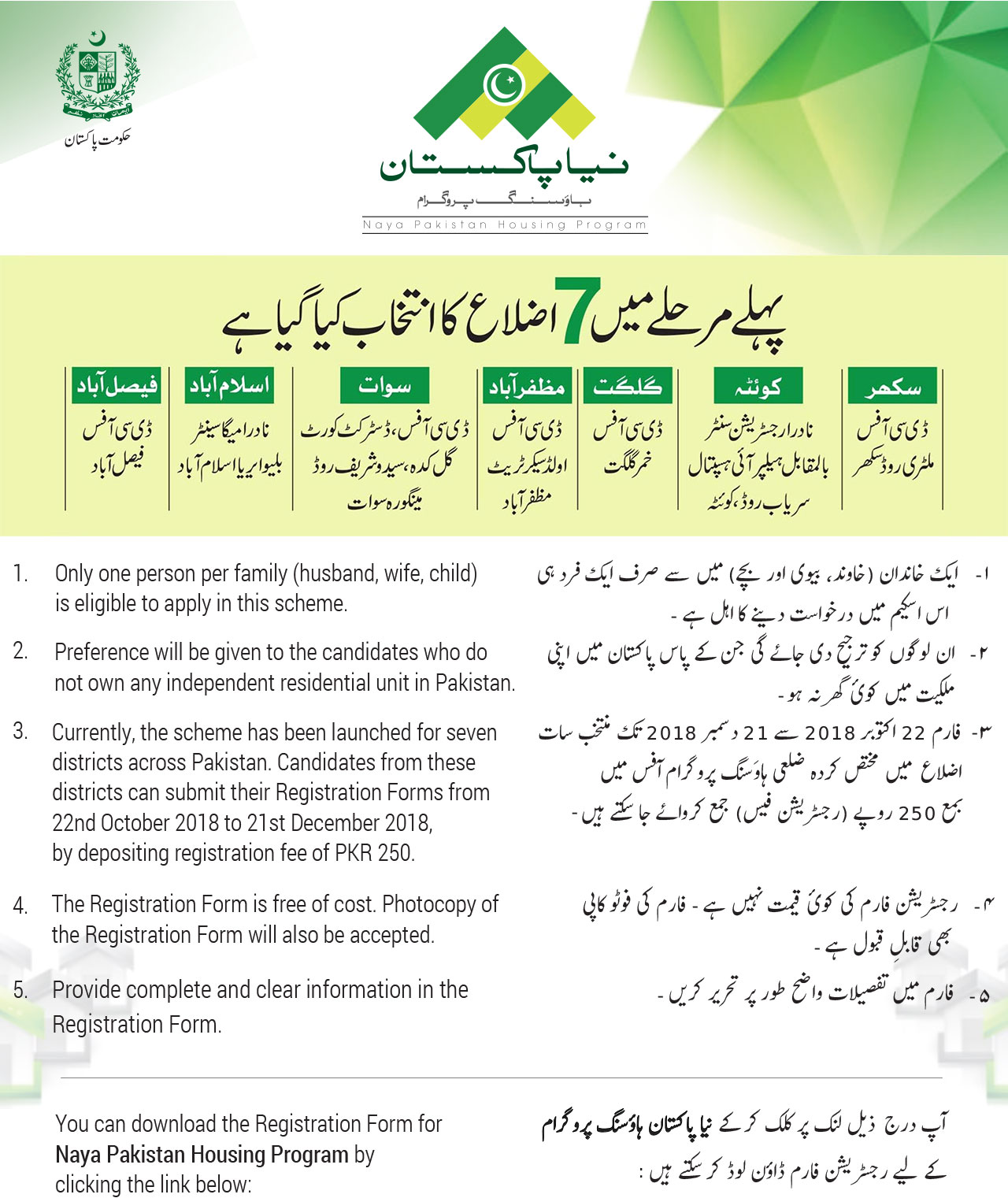 1- This form is for registration only.
2- Based on the data collected from these forms, housing specification including design,
price and site will be decided for the applicants.
3- Preference will be given to candidates who do not own any independent residential unit in Pakistan.
4- Only one person per family ( husband, wife and children ) is eligible to apply in this scheme.
5- Rs.250 per form should be deposited along with this registration form.
6- It is compulsory to fill every field. Please fill this form in ENGLISH using BLOCKLETTERS.

Filed that will be filled:-

Date of Submission of Registration Form : 22 October to 21 December 2018

Where to Submit Registration Form?